Mahendra Singh Dhoni is a great Indian player, and he was the captain of the Indian team from 2007 to 2017. He has born on 7th July 1981 in Ranchi. The current age of MS Dhoni is 39 years, and he belongs to a Hindu Rajput family. The village where he used to say was Almora district in Uttarakhand. He has two siblings, and from his childhood, he was a fan of cricketer Sachin Tendulkar, actor Amitabh Bachchan, and singer Lata Mangeshkar. He has completed his study in Ranchi, and he was excellent at football and badminton. Also, he got selected to play for his district. He used to play as a goalkeeper, and one day his coach sent him for playing cricket. Although he has no idea about cricket, he got impressed by his wicket-keeping skill, and he got chosen as a wicketkeeper for his playing club. He started performing very well, and he had won the match under 16 championship, and after that, he started focusing on his cricket. In 1998 he used to play for the junior Bihar team, and after that, in 2002, he began playing for the Jharkhand cricket team as well, and MS Dhonihad gave an incredible performance. He got Ranji trophy, Deodhar trophy, Duleep trophy. He started getting many recognitions for his performance. In 2003 he played for the Indian team against Pakistan, and he helped the India team to win the match. He was giving back-to-back stunning performances by Sourav Ganguly and Ravi Shastri. 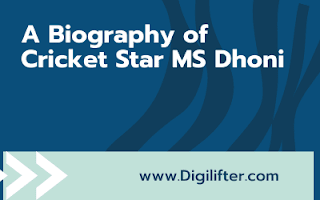 By seeing his outstanding performance in 2004, the Indian team has decided to pick him up in the ODI squad for playing against Bangladesh. However, MS Dhoni has not a great started with his ODI career. But in the second series of the match, he made a record as his score was 148, and it was the highest score made by an Indian wicketkeeper. In the ODI series, he got significantly less chance in bating in his first two games against the Sri Lankan match. In the ODI series, he again wins the game for Indian, which was against Sri Lanka. He made an unbeatable record, and he got the Man of the Series award. He won back-to-back cricket matches against Pakistan, South Africa, Sri Lanka, Australia and won the trophy for his performance. In the 2007 world cup, he again contributed to the Indian team. He made 100 scores for both series which was against West Indies and Sri Lanka.But unexpectedly, in the group stage, India lose the game against Bangladesh and Sri Lanka, and Dhoni’s score was only 29 runs in that match. He had given a very disappointing performance in the 2007 world cup. But in his fourth ODI cricket, he got man of the series and Man of the Match award for his performance. In 2017 he became the captain of the Indian team, and he made many captaincy records as he wins many matches during his captaincy also. He is one of the uppermost run scorekeepers in One Day Internationals (ODIs), with more than 10,000 runs scored. Under his captaincy, India has played two world cups, and in 2011 Indian won the world cup, and in 2015, India reaches the semi finale. He is not only a great player also he is an honest and very down-to-earth person. He has 210 million flowers. Since 2008 MS Dhoni is also playing IPL as part of the Chennai Super king team, and they had won the matches thrice in 2010, 2011, 2018, and this the most winning team in IPL. Apart from his cricket background, his personal life also attracts many of his fans. He has a beautiful wife and a wonderful daughter. Her wife’s name is Sakshi Dhoni. In 2010 he got married to her. He is the only cricketer who has a biopic of his life, MS Dhoni, the untold story, and this film was directed by Neeraj Pandey and acted MS Dhoni role by Sushant Singh Rajput. He is a great cricketer and a great human being too. In August 15, the whole cricket society was left shocked as MS Dhoni, who last played for India in July 2019, publicized his sudden retirement from international cricket.