Geico Commercials notwithstanding, one of the major things that distinguished the caveman from his more advanced ancient Grecian counterpart a millennium or so later was, quite simply, his failure to look above his head. Writings and pictures on the walls of caves, depicting animals, trees, people even the occasional round-tusked wooly mammoth but For the most part, the primitive man seemed oblivious to that which was above his head.

When, Ptolemy, Hipparchus, Copernicus and other early astronomers came along, they not only looked above their head, but when they did, amazingly, they saw stars. They certainly didn’t see all of the stars, or even all of the planets in our solar system for that matter, but they were able to distinguish the movement of the planets from the apparent stationery positioning of the stars.

The zodiac actually describes an annual cycle of 12 stations along the ecliptic, which is the passage of the sun through the heavens as it moves by the various constellations. This journey of the sun divides the ecliptic into 12 equal parts creating zones of celestial longitude.

Early astronomers referred to the five planets, they could see with the naked eye as the “wandering stars.” These planets included Mercury, Venus, Mars, Jupiter and Saturn, and early astronomers used the movement of the sun and these planets as a way of predicting and or explaining various occurrences here on earth. 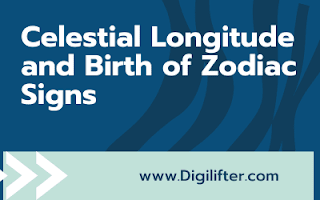 Over time, different Western, Indian and Chinese interpretations of the zodiac have emerged. Nicolas Copernicus was clearly the first astronomer to formulate what is called a heliocentric cosmology, which is basically the study of the universe and man’s place within it.

Modern western astrological signs can be seen as pictorial representations of the same symbols used since Hellenistic times. The glyphic representation of these characters can be seen in many fonts still utilized today. Modern-day astronomy still finds the zodiacal constellations a convenient way of marking the sun’s path along the ecliptic.

Quite logically, the zodiac can be used to mark the moon’s path and the path of the planets along the ecliptic as well. So while the continuous use of the term zodiac and various derivative terms and descriptions relating to same are to some degree a matter of convenience and tradition, they are, at least, every bit as useful as the cave man’s ancient habit of dragging his date into the cave by her hair.

The almost unbelievable number of caricatures of the various signs of the zodiac are arguably about as easy to calculate as the number of stars. Incredibly, these representations areas diverse as the distance between stars and as commonly agreed upon as the likely pictures of other inhabitants of the universe.

As just one example of the complexity of trying to accumulate common zodiacal signs, consider that Western, Chinese, and Indian zodiac signs abound and there is every likelihood that ancient Mayan, Aztec and Incan versions of zodiacal signs existed but for the most part, are lost. Suffice it to say there are more different representations of signs of the zodiac then there are billboards along Interstate 15 going into Las Vegas.

Further, as if there were not already enough variations of the signs of the zodiac or symbols to represent those signs, additionally, astrologers will work up complicated presentations called astrological charts, which are based on loose interpretations of the many astrological rules, which when taken as a whole suggest that all of life is literally guided by the stars.

Fortune Teller’s claim to be able to interpret the set of astrological data using charts that have been devised based on complex relationships between the planets and stars and even their proximity to one another or their positioning in front of or behind or between some other planet at any given time.

So that if you were born under a certain astrological sign and that sign is typically heavily influenced by a second sign and because you dwell in this astrological “house” you are predisposed to get along best with someone who has this other astrological birth sign.

These factors lead inevitably to statements like “you must be sure never to get married during a full moon” or “perhaps you will only be able to conceive a child under a harvest moon,” or even ” Don’t moon grandma in the moonlight, Moonpie, ‘cause at her age, the shock could send the grim reaper into her seventh house”…etc…well maybe not that last one.

Because of the complicated nature of astrological forecasts and fortune-telling, much skepticism has grown up around those who practice these ideas. While many people still profess strong beliefs in the power of astrology, it tends to at the very least, lose some credibility by association with various flimflam artists, charlatans, and other miscreants in search of an easy dollar. Like many other traditions and influences around us in society, some people swear by it while others simply swear at it.