Skip to content
Kangana Ranaut is a successful Indian actress as well as she is a filmmaker too. She has born on 23rd March 1987 in Bhambla, in Himachal Pradesh. She is 34 years old, and only at this age has she achieved a lot of success in her life. She is a small-town girl, and her parents want her to become a doctor, but she has decided to take her career into the film industry. She was very determined about her career, and for making her profession, she came to Delhi when she was only sixteen. She started her career with modeling and took training under the theatre, and her first film was launched in 2006, “Gangster.” For this Gangster movie, she achieved her first Filmfare award for a best female debut. She has given back-to-back superhit movies like Woh Lamhe (2006), Life in a metro (2007), Fashion (2008), and she won the national award for best actress.
She had made all her fan proud when she achieved the Padma Shri award in 2020 for best actress. She is also known as a fashionable celebrity and outspoken in front of the media. Many times, she is in controversy for her personal and professional life. As per the current record, her yearly income is around more than 10 Crore. She lives in a luxurious bungalow in Mumbai. Also, she has 7600 square feet beautiful bungalow in Manali. Apart from this bungalow, she has purchased many luxury cars. When she was only 21 years old, she bought her first car, BMW 7 series. Also, she has invested in many properties. She belongs to a Rajput family, although she has struggled a lot for the money at her starting of the career. When she decides to make her career in the film industry, her parent didn’t support her. This bold and beautiful actress is the inspiration of many people is Kangana Ranaut. 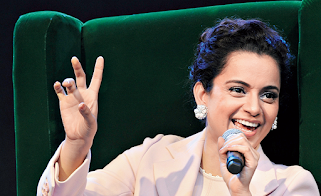 This actress has an enormous fan base across the country, not only for her acting skill but also for her powerful, brave nature. She often tweets on her Twitter account directly or in front of the media; she criticizes some web series or about some actor or actress who she feels was not doing well. Some of her other successful movies were Raaz, once upon a time in Mumbai, Tanu weds Manu, Krish 3. Her super hit blockbuster movie was Queen in 2014. She was playing a comedy-drama role, and she has given a fantabulous performance, and she got an award for her performance. Another fantastic film was Manikarnika, The Queen of Jhansi, where she was portrayed as a fighter. We saw her incredible sight when she was representing herself as a Jhansi Rani. Also, she performed well in Kabaddi movies as a kabaddi player. She has a spark in herself; she is a good actress and a good human being. She has contributed 25 Lakhs to the PM Cares fund, and her family members have donated too.
She is a fearless actress as she shared her ominous phrase of life with everyone. When she left her home to become an actress at that time, she got drug-addicted for two years, and the people she was with, only death can save her. She confesses this bitter truth of her life by sharing a video on social media. She also said that she came out of that situation and lived a healthy life, and she wishes everyone a healthy life. She said her life was full messed up when she was in her teenage, and also said how she involves herself in good things like yoga to come out from that worst situation. During the pandemic situation, she made many videos to people aware of coronavirus. Kangana Ranaut is not only a good actress also is an inspiration to many people.