Even though Amritsar is the holiest destination among Sikh pilgrimage, it attracts visitors of all faiths and backgrounds. The Golden Temple, Akal Takht, Jallianwala Bagh, and Gobindgarh Fort are all major tourist attractions in Amritsar. Towards the south of Amritsar station, the Old City is filled with ancient landmarks and attractions such as the Golden Temple. The North Side of Amritsar is home to posh eateries, hotels, and spacey neighborhoods, as well as other sparkling indicators of the city’s historical success. Let’s take a deeper look at all of Amritsar’s attractions and Places to Visit In Amritsar

Amritsar is a place better enjoyed rather than just seen. Here are a few must-see tourist attractions places to Visit In Amritsar in the area that you may visit in three-four days. 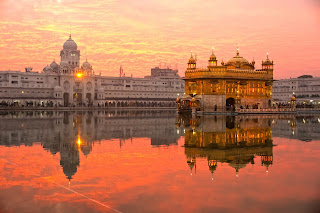 The Golden Temple, Amritsar’s crowning treasure, is the city’s biggest attraction and among the top Places to Visit In Amritsar. The shrine, which dates from the 16th century, is a place of prayer open to individuals of all faiths and backgrounds. Sri Harmandir Sahib, commonly known as Darbar Sahib, is India’s top popular tourist destination. The shrine’s construction is stunning, with a distinctive blending of Hindu and Islamic creative influences. Semi-precious gemstones, Meenakari art, and glasswork decorate the temple’s inner surfaces, providing a visual feast for the eyes. The peaceful water body enhances the temple’s splendor. With its golden luster and relaxed vibe, the temple is the essence of peace.

The best time to explore: Any time of year is an excellent time to visit Golden Temple.

This 12-acre waterpark and theme park is among the finest places to visit in Amritsar for adventurous and exciting activities. Sun City Park includes roughly 14 exciting and enjoyable rides for individuals of all ages to explore. Sun City Park has two attractions: a theme park and a water park. Both of these locations have a plethora of adventure opportunities.

The best time to explore: Summer is the ideal time to tour Sun City Park because the weather is warm, and one could spend the day swimming and riding the numerous rides.

A journey to Amritsar would be meaningless if you didn’t experience the Wagah Border Beating Retreat ceremony’s nationalistic fervor. This ritual takes place each sunset on the border between India and Pakistan. Soldiers from both nations execute the ceremonial as they march, approaching the gate once it is opened in the evenings.

As the soldiers salute one other, the national flags from both nations were respectfully lowered. Because a security screening controls access, it is best to come 1 hour before the event starts to secure a prime spot with such a decent opinion. It is among the greatest Places to Visit In Amritsar.

The best time to explore: The winter season is the season to visit Wagah Border since the weather is ideal for enjoying a spectacular spectacle.

Jallianwala Bagh is the most popular tourist attraction in Amritsar, and it serves as a poignant remembrance of India’s independence struggle. It also reminds me of the British armies’ horrors committed against the Indian people under colonial rule. The bullet marks left by the bullets fired during the Jallianwala Bagh massacre may still be seen on the wall.

The best time to explore: To get the most out of your visit to Jallianwala Bagh, go during the winter months when the weather is chilly and lovely, and you may stroll around freely.

The Gobindgarh Fort was erected by a Sikh warrior named Gujjar Singh Bhangi and his troops and is now available to the public as a heritage museum. The fort was renamed Gobindgarh fort just after the 10th Sikh guru by Maharaja Ranjit Singh, but it was previously known as the Bhangian da Killa. Brick and lime were used to build the fort in a square design. The entrance is Nalwa Gate, and the second is known as Keeler Gate. The Keeler gate is unique because it can be thought to be connected to a tunnel leading to Lahore. The fort was under the possession of the Indian army till February 10, 2017.

The best time to explore: The winter season is indeed a great time to visit Gobindgarh Fort since the cold weather would make your trip extra unforgettable.

A vacation to Amritsar is not ever done without a stop at Hall Bazaar, one of the city’s most famous marketplaces. This historic bazaar is indeed a shopper’s dream, with everything from gadgets to everyday items, phulkari embroideries, bangles, local handicrafts, traditional clothes, Chinese lamps, and perhaps even daily necessities. However, the market is well known for its elaborate and colorful jootis. Another interesting point is the Gandhi Gate, a Mughal-style entry gate to the bazaar. Wandering and shopping within the market’s small aisles, which provide a sensory overload of bright views and noises, maybe an adventure within itself. This market is one of the must-see Places to Visit In Amritsar.

The best time to explore: Any time of year is an excellent time to visit Hall Bazar.

We know Amritsar’s horrible history during the British Empire’s reign. Among all the historical and cultural fans nowadays, the Partition Museum is among the most famous destinations to visit in Amritsar. The Division Museum is well-known for becoming the world’s first museum dedicated to the harrowing stories of the millions who have been forced to endure the effects of a brutal partition. The Arts and Cultural Heritage Trust created it (TAACHT). Newspaper articles, photos, and other personal things contributed by persons who witnessed the Partition could be found. The museum is primarily dedicated to the deceased, survivors, and legacies.

The best time to explore: the Partition Museum is during the winter months (October to January) when the weather is cool and lovely, and you could cherish your stay.

The Mata Lal Devi Mandir is as strange as the Golden Temple is beautiful. According to history, women who visited this Hindu shrine devoted to the female saint Lal Devi might increase their fertility. The labyrinthine attractions, however, look like a funhouse to non-devotees.

You’ll go into the gaping jaws of funhouse-style animal engravings, witness enormous wooden cobras, and crawl thru a wet cave to the shrines of Lal Devi after wandering along dark, narrow corridors that lead to colorful rooms decorated in mirrored mosaics. The whole thing would offer you a different view on Hinduism and how adherents practice spirituality, and it will undoubtedly be among the most satisfying things to see and the Best Places to Visit In Amritsar.

The best time to explore: Lal Devi Mandir would be to take advantage of the pleasant weather during the winter season.

The Akal Takht, commonly known as the Throne of the Immortal, is the Sikhs’ highest governmental institution. That’s one of Amritsar’s most fascinating tourist attractions. Guru Hargobind established this site in 1606. The Akal Takht is among the five Takhts of Sikhs and is situated within the Golden Temple compound. In the Sikh community, such Takhts were places of control and responsibility. It is the seat of the Jathedar, the highest-ranking of their spokespeople. The Akal Takht is intended to be a symbol of political sovereignty and fairness and a place wherein Sikh spiritual issues can be acknowledged and discussed.

The best time to explore: Akal Takht is during the winter season (October to January), mild and pleasant weather. The region surrounding Akal Takht is illuminated at night with lighting and garlands.

Tarn Taran is a Sikh pilgrimage destination in the Tarn Taran District of Punjab, around 22 kilometers from the Golden Temple. The Gurudwara was built by Arjan Dev, the fifth Sikh Guru. The Sarovar (pond) of this Gurudwara is regarded as the largest of all the Sikh Shrines. Each month on Amavas, devotees flock to Tarn Taran, which is one of India’s most prominent Sikh pilgrimage locations (New-Moon Day).

The best time to explore: Gurudwara Sri Tarn Taran Sahib is best visited on the day of Amavas, which falls in March. The gurdwara is decked with garlands and lighting of multiple colors on this day.

Maharaja Ranjit Singh Museum is devoted to Maharaja Ranjit Singh, the Lion of Punjab. The museum is located in one of his gorgeous summer palaces, which is motivation sufficient to visit. The building is bordered by well-kept gardens and makes for a lovely sight. As soon as you enter the museum, you will be able to see a plethora of items and relics which bear testimony towards this great leader’s glory days. Paintings, costumes, swords, and coins are items on display inside the museum. Other articles and artworks are on display about the heroic ruler’s different conflicts.

The best time to explore: The winter season is a great time to visit Maharaja Ranjit Singh Museum because the weather is cold, and one may experience a wonderful visit.

Amritsar, which is the core of Punjab, is a sparkling city that embraces the vivid colors and vitality of existence as we understand it. The folks of Amritsar always resisted injustice with incredible heroism since time immemorial, owing to their great power. Amritsar, established in the 16th century by Guru Ram Das, the fourth Sikh guru, is blessed with a supernatural aura that you would sense as quickly as feasible upon the city’s hallowed grounds. Amritsar has experienced a few of history’s most fantastic important occurrences, which shook the country towards its soul and permanently transformed the city’s demographics. We have discussed the best places to visit in Amritsar, you can explore these must-go Places to Visit In Amritsar

Today, Amritsar is indeed an excellent combination of heritage, tradition, spirituality, and modernism, and the sites to explore in Amritsar showcase all of these characteristics. The smiles and cordial attitude of the residents reflect the charm that the city exudes. It doesn’t matter if you want to go deep in history or appreciate the natives’ fiery energy; the places to Visit In Amritsar focus on providing you with the chance to do both.